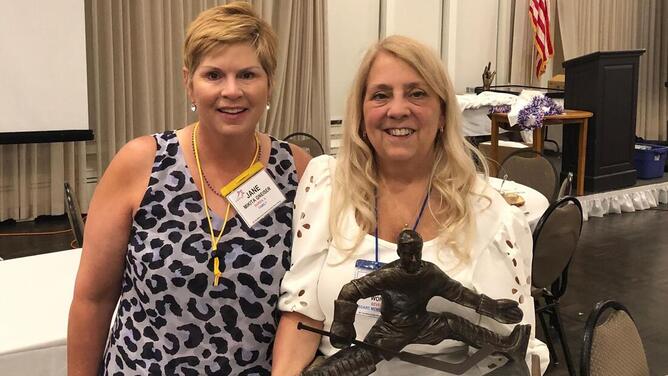 Bruins' Wonoski Feted for Work with Deaf Hockey Program
​BOSTON - Karen Wonoski couldn't help but think of how far her son had come.

Some 25 years after Mike Wonoski first attended the Stan Mikita Hockey School for the Deaf and Hard of Hearing, there he was standing at the podium to deliver a speech.

Karen, the Bruins' alumni coordinator since 2014, was beaming with pride but wasn't quite sure what he was up there to present. She quickly learned he was there to talk about her.

"I'm up here tonight because I want to thank my mother," Mike said from the podium during an awards ceremony at the hockey school's annual camp last month just outside of Chicago. "I want to thank her for bringing me here all these years, making new friends, family…the Olympic games, World Championships.

"All these years, you've been volunteering with AHIHA and all those Dunkin' Donuts runs late at night…and tonight, you get one of these awards because you deserve it for everything you've put into the camp."

As Mike finished his speech, the audience rose to its feet to give Karen a standing ovation, a worthy recognition of her two-plus decades of volunteerism with the American Hearing Impaired Hockey Association. For her efforts she was awarded the "Gunzo Award," the organization's highest honor for its volunteers, given "annually to the AHIHA staff member who best symbolizes spirit and energy."