BOSTON BRUINS ALUMNI
BRUINS ALUMNI Game Rules and Format
Covid-19 Safety Considerations
* EVERYONE will be asked to fill out and sign a Covid19 "tracing form."

* A dressing area inside the rink will be setup w/chairs.

* FACE COVERINGS MUST BE WORN AT ALL TIMES ON THE ICE & IN THE ARENA INCLUDING THE BENCH.

*Please use entrances & exits as designated

*Max of 2 coaches or trainers on the bench to work each door. One door is to be used for players coming off the ice and the other door for players going on the ice (closest to goalie). Players continue to move down the bench as other players go on the ice.

*NO TEAM PHOTO before the game or HANDSHAKES AFTER THE GAME.  We would prefer that all players from both teams line up on their bluelines after the game, face the camera and raise their sticks to salute the fans who are watching the one-hour show.

*ALL PLAYERS ON BOTH TEAMS will need to arrive 45-60 minutes before the game time to sign the form, tape interviews etc...BOTH teams must be dressed and ready to go on the ice no less than 5 minutes before game time since we will be on a tight schedule due to taping the game. If players are late the teams will need to play shorthanded.

*SELF POLICING TO MAINTAIN COMPLIANCE IS THE RESPONSIBILITY OF BOTH TEAMS ALONG WITH THEIR PLAYERS & STAFF!
BRUINS ALUMNI Game Rules
* "NEW" 4 ON 4 FORMAT w/LIMITED FACEOFFS!

**12 PLAYERS AND ONE GOALIE MAX/TEAM (if the organization has more than 15 skaters in their lineup for fundraising purposes, the Alumni is willing to play 2-25 min running time games against 2 teams of 12 players & one goalie. Some players can play in both games if required)

*WARMUP...2-3 MINUTES THEN PLAYERS WILL LINEUP ON THEIR RESPECTIVE BLUELINES TO BE INTRODUCED.

*REMEMBER ... 4 ON 4 IS A FLOW GAME! PLEASE KEEP THE PUCK MOVING TO AVOID TRAFFIC JAMS IN FRONT OF THE NET AND IN THE CORNERS! GOALIES ARE ENCOURAGED TO MOVE THE PUCK BUT CAN HOLD IT FOR FACEOFF.  THERE WILL BE A LOT OF CHANGING ON THE FLY SO THAT THERE'S NO CONFUSION OF WHO IS UP NEXT, ALL PLAYERS SHOULD KNOW WHO THEY ARE BEHIND ON THE BENCH SO THEY KNOW IF IT'S THEIR TURN TO GO!!
All Games to be Presented on Bruins Alumni TV! 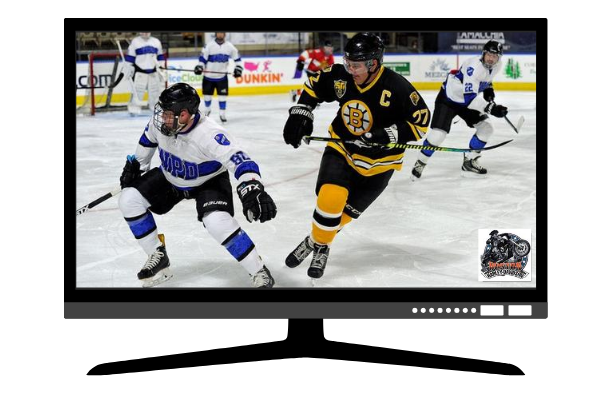